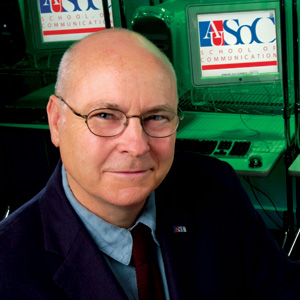 Larry Kirkman is a Professor of Film and Media Arts and dean emeritus of the American University School of Communication, where he heads the film division’s concentration on social, political and cultural impact. As an expert in public-purpose media, he has played leadership roles in philanthropy for media policy and practice, advocacy communication, video and documentary film production, journalism and academia. Currently, he serves in strategic capacities at two flagship academic centers, as an executive producer in the Investigative Reporting Workshop and senior strategy advisor and senior fellow in the Center for Media and Social Impact.

His work at the intersection of documentary, advocacy, and journalism includes public television documentaries funded by PBS, CPB and NEA, and social advertising campaigns, including Union Yes for the AFL-CIO, and Connect for Kids, a partnership between the Benton Foundation and the Advertising Council, which received more than $300 million in donated media and was a pioneer in digital strategies. As the American Film Institute’s first director for video and television, he produced the National Video Festival at the Kennedy Center in 1981 and 1982, and as executive director of the Benton Foundation, in 1993 he produced the International Advocacy Video Conference, which brought together 300 producers from 18 countries to define the emerging field. Also at Benton, he was co-editor of Strategic Communications for Nonprofits, a series of media guides distributed by foundations to their grantees, including Ford, MacArthur and Carnegie; published Making Television Matter in collaboration with MacArthur and POV; and he co-founded the Coalition for America’s Children and its Who’s for Kids and Who’s Just Kidding campaign. He served as chair of oneworld.org, an international online news service and innovator in public service communications.

Larry can be reached at larry [at] american [dot] edu